The first half of 2021 witnessed a growth of over 100% in  SANY’s sales revenue in 50 major overseas markets, including both those in developed countries, such as France and Russia, and in developing countries, such as India, Indonesia and Vietnam. Among them, India was a “land of harvest” with the year-on-year figure being up by 109%, and products were sold to remote regions as far as Africa. The interim sales revenue in the US increased by 72%, making SANY one of the fastest-growing construction machinery companies in North America, while the sales revenue in Europe improved by 40% with great progress achieved in the localization of products. 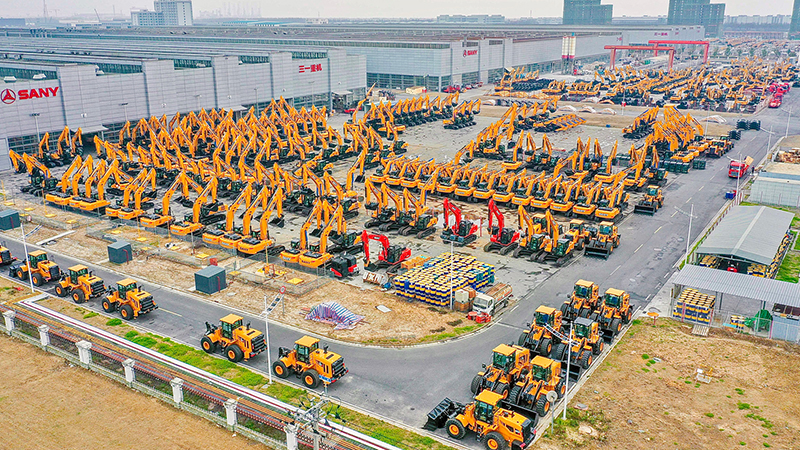 A shrunken global market in 2020 as a result of COVID-19 did not impede SANY from advancing in the way of internationalization and making great contributions to China’s foreign trade. According to French newspaper Le Monde, the total foreign trade volume of construction machinery from China in 2020 reached € 165 billion, exceeding Germany for the first time and becoming the world leader.

Three factors have led to SANY’s impressive performance throughout the pandemic.

First of all, SANY has focused on improving the core competitiveness of its products in the global market. Also, remarkable improvements have been made in SANY’s service capability, dealer system, spare part supply system and digitization. In 2020, SANY released 51 international products, up 24% compared to 2019, and continues to gain greater market shares abroad.

Second, SANY has been creative and innovative with its international sales channels and has supported the efforts of dealers in China to go abroad. SANY has also focused on absorbing more talent with international backgrounds representing the greater variety of markets SANY desires to reach. As of June 2021, SANY has established sales networks in over 100 countries with more than 300 well-run dealers around the world, the most in the industry.

Finally, SANY and its global branches have implemented solid anti-pandemic measures during the worldwide outbreak which guarantee safe production. Not a single positive case was reported from employees of SANY Europe, and SANY India has provided vaccines to its 1,500 employees and their families, giving SANY an advantage when the global economy begins to recover from the stall.